the Sinaiticus Revelation as Commentary? - redating Andreas to match Aleph

A much simpler scenario is a Revelation that developed out of the Andreas commentary.

An interesting Sinaiticus quirk is in Revelation, where it is in essence an early commentary pre-figuring later commentaries. Properly considered, this is just one more of numerous philological evidences against Sinaiticus authenticity. (This one is only modest, so far. Hermas is super-alarm bells. Others vary, discoveries are made now that we know about the issues. With Revelation, it is worthwhile to point elements like this out in our desire to understand the textual history.)

Scribal habits and theological influences in the Apocalypse: the singular readings of Sinaiticus, Alexandrinus, and Ephraemi (2006)
Juan Hernandez
http://books.google.com/books?id=8C1YlHaGpooC&pg=PA196

The Apocalypse in codex Sinaiticus is a striking example of a fourth-century text that differs substantially from modern critical editions. It exhibits dozens of differences at key points, reflecting the concerns, interests, and idiosyncrasies of its earliest copyists and readers. Taken as a whole, Sinaiticus’s text of Revelation may constitute one of our earliest Christian commentaries on the book, disclosing its fourth-century milieu and anticipating the later concerns of Oecumenius and Andrew of Caesarea. This is no commentary in the contemporary sense, however. Sinaiticus’s readings range from the spectacular to the mundane and include the theological, the liturgical, the commonplace and even the infelicitous. It is a text ever in tension with itself, effective both in its capacity to obscure as well as in its regulation of meaning. Clarity and confusion co-reign and compete for our attention. Despite that, we can discern a concerted effort to elucidate the Apocalypse’s message by scores of changes throughout. Some of these are inherited. Others created. All affected the reading of the text.

Andreas is about 600 AD, Oecumenius is now considered only a bit later. Likely, there was no "anticipation" here. A much simpler explanation, the Sinaiticus Revelation was written by some one familiar with the commentaries. A good study and check would be word matches of the Sinaiticus text with the later commentaries.

Once you get past Sinaiticus circularity, you start to look at the evidences afresh.

Early in 2012, I wrote:
“The corrections of an ancient manuscript offer an unparalleled opportunity to evaluate the judgments of early scribes and the state of their exemplars. Moreover, one can also revisit the assessments of textual critics who conscript scribal corrections for the reconstruction of the NT’s transmission history. Codex Sinaiticus’s fourth-century corrections offer an opportunity to do both. Over a half-century ago, Josef Schmid claimed that the Apocalypse's Andreas ‘text-type’ went back to the fourth-century on the basis of its relationship to Codex Sinaiticus's fourth-century corrections. This judgment, however, gave Colwell pause, noting that Schmid was relying on an earlier study by Boussett that had not been assessed in light of recent developments regarding the history of ‘text-types.’”

“...before Schmid’s argument for a fourth-century date for Andreas is rejected, the evidence (which Schmid refers to) of the agreement of Aleph-a (the fourth century corrector of Sinaiticus) with Andreas must be explained.”

—and even created charts to compare the data mined from the apparatuses of von Soden, Schmid and Nestle-Aland—with those of Tischendorf and Hoskier.
Last edited: Jan 22, 2023

The Corrections of Codex Sinaiticus and the Textual Transmission of Revelation:
Josef Schmid Revisited*
Peter Malik
University of Cambridge
https://core.ac.uk/download/pdf/42338536.pdf

Following Wilhelm Bousset, Schmid argued that a particular group of corrections in Codex Sinaiticus reflected a Vorlage with a text akin to that of the Andreas texttype. By dating these corrections – unlike Bousset – to the scriptorium, Schmid utilised their witness to trace the text of Andreas back to the fourth century. Recently, Juan Hernández has shown that the corrections cited by Schmid were significantly later, hence calling his fourth-century dating of Andreas (among other things) into question. Through an analysis of the corrections cited by Schmid, supplemented by a fuller data-set of Sinaiticus’ corrections in Revelation, this study seeks to reappraise Schmid’s claims concerning the textual relations of these corrections, and identify their role in the later transmission of the text of Revelation.

1. Introductory Remarks: Schmid, Hernández, and Beyond

In Josef Schmid’s influential study of the textual history of Revelation, Codex Sinaiticus figures prominently as the main (and the only complete) representative of one of the two early text-forms. Unlike the superior text-form attested by the codices Alexandrinus and Ephraemi, as well as
the text of Oecumenius’ commentary, the one attested by Sinaiticus, 𝔓47 and Origen already contains a fair number of improvements (“Korrekturen”) to the “original text.”1 Sinaiticus was probably produced around the middle of the fourth century (or possibly earlier), 2 so Schmid’s claim that, already in the fourth century, the text of Revelation in Sinaiticus was corrected towards another textform, known from the later commentary of Andreas, is remarkable. Now, the fact that a number of Sinaiticus’ corrections reflect a Vorlage akin to the Andreas text was not Schmid’s discovery. Rather, Schmid builds on an earlier work of W. Bousset, who had identified a number of corrections related to what is now referred to as the Andreas tradition.3 Significantly, Schmid reinterprets


Hernández is correct in identifying a serious dating error in Schmid’s argument, and Sinaiticus’ many corrections to the text of Revelation definitely warrant reinvestigation.9 However, his claim of a seventh-century date for Schmid’s Sa corrections may appear, in this article at least, overconfident. Indeed, Milne and Skeat were themselves hesitant to ascribe a definitive date to the C-class corrections, allowing for some leeway anywhere between the fifth- and seventh-century dates. 10 Later on, Skeat would give a more specific judgement concerning the Ca corrector in particular, dating him to the sixth century.11 More recently still, Amy C. Myshrall’s palaeographical analysis led her to similar conclusions. 12 And even in his latest article, Hernández has invoked Milne and Skeat’s more cautious stance, calling for fresh palaeographical investigations. 13 If indeed C a worked in (roughly) sixth century, then his corrections still predate, by almost a century, the composition of Andreas’ commentary, not to mention later minuscules with the Andreas-type text. Since the text of Ca’s exemplar must have predated his correcting activity, it could theoretically still be viewed as a sixth-century – and possibly even earlier – witness to the Andreas text. The dating of
these corrections, however, cannot, as such, settle the matter. Indeed, as will be seen, further com

Most subsequent Eastern Christian commentators of the Book of Revelation have drawn heavily upon Andrew and his commentary, which was preserved in nearly 100 complete Greek manuscripts, as well as translation in Armenian, Georgian, and Slavonic manuscripts.

This argument gains in plausibility when we take into account the fact that C a corrections may well have predated the composition of Andrew’s
commentary by almost a century, at which time the Andreas text-form was most likely still evolving. If this suspicion proves to be correct – and only further study can determine that – even Schmid’s notion of the recensional nature of the Andreas text may be called to question. For
Schmid construed the Andreas text as “eine Rezension im eigentlichen Sinne, das Werk eines Mannes ... der den Text durch alle Kapitel durchkorrigiert hat.”93 Nevertheless, we posses no documentary evidence for such a thoroughgoing recension that would predate the composition of Andreas’ commentary – and nor did Schmid, as he did not base his recensional theories on a purely documentary basis, but rather on a large number of “Korrekturen” that were peculiar to the Andreas text.94 Thus, we may be on firmer ground in invoking E.C. Colwell’s dictum that “[a] text- type is a process, not the work of one hand.”95 Rather than an incomplete witness to an already completed recension, then, these Ca corrections could possibly be a witness to such a process with respect to the text of Andreas. The notion of a lengthier, slower process of correction and revision, whereby older readings are mixed with the secondary readings, could thus account for the presence of older readings in later text-forms. 96 One may well wonder whether these “Korrekturen” could not have, in some cases at least, originated as manuscript corrections proper. 97 An inevitable conclusion of the present discussion is that Ca corrections, when properly identified and understood, are not what either Schmid or Bousset held them to be. For one thing, as Hernández has demonstrated, they significantly postdate Sinaiticus’ production, and thus cannot be used as the fourth-century evidence for the Andreas text. Secondly, given the textual affinities of Ca corrections outlined above, Bousset’s claim that the corrector used a Vorlage with his K text – akin to that of the text of Revelation in Andreas’ commentary – seems problematic as well. What seems more likely is that our corrections may rather prove to be an important, if indirect, witness to the development of the later forms of the text of Revelation.
Last edited: Jan 22, 2023

Is Av clearly defined? Seems to be Andreas. 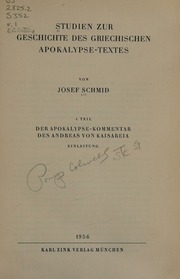 PIcs of the Schmid Andreas corrections.