Grantley gives him 3 pages beginning in Biblical Criticism on p. 156, after that he shows up often in Newton.
In Ghost of Arius he is part of a section:
11. Reactions to Simon's work: Gilbert Burnet, Thomas Smith, Antoine Boucat, Thomas Firmin
p. 193-202
Earlier John Evelyn and Edmund Calamy and Stillingfleet are placed as Simon critics and responders, including sermons,

​
Simon found another detractor in the Franciscan Antoine Boucat (†1730), professor of theology at Paris. In his Theologia patrurn scholastico-dogmatica (1716), Boucat reheated some of Roger’s arguments against Simon, and argued strenuously for the comma as the “legitimate offspring of St John” (genuinus S. loannis foetus). Boucat bases his argument on internal grounds (the apparent coherence of the seventh and eight verses) and external evidence (the fact that the comma was quoted and taught by the Fathers from Tertullian onwards). In an appeal to the strength of ecclesiastical authority, Boucat asserts that Simon had drawn upon himself the anathema of the council of Trent for daring to challenge its affirmation of the canonicity of the Johannine epistles.117​
​
117 Boucat, 1766, IV:321-331. Filser, 2001, 521, cites Boucat as typical of the return to dogma in early eighteenth-century Catholicism. ​
​
Boucat, Antoine. Theologia patrum scholastic-dogmatica, sed maxinte positiva. Venice: Ghirardi,​
1766.​
​
Click to expand...

also Prudent Maran and Louis Roger are in the section

Grantley gives a small quote from the 2-page section that Firmin has on the heavenly witnesses.

Anon. The Charitable Samaritan: or, a Short and Impartial Account of that Eminent, and Publick-spirited Citizen Mr. Tho. Firmin. London: [n. p.], 1698a.
https://books.google.com/books?id=YBFlAAAAcAAJ&pg=PA16
p. 16-17
Firmin is pro-Simon, although there is no indication that he was particularly involved in Bible textual matters, other than repeating from Simon. He is variously called a Unitarian, or perhaps having Sabellian tendencies.
Click to expand...

REVIEW OF THOMAS SMITH ON PBF

symmetry of transmission and solid textual arguments of Thomas Smith
https://www.purebibleforum.com/inde...-arius-grantley-mcdonald.421/page-2#post-4978
This problem of textual polemic over analysis can be seen very clearly in the discussion of Thomas Smith taking on the arguments of Richard Simon

Thomas Smith and the Socinus (and Erasmus) calumny - the Vulgate Prologue of Jerome
https://purebibleforum.com/index.ph...-arius-grantley-mcdonald.421/page-2#post-5342

Grantley Robert McDonald comments, responds to the 2021 above

In my book Biblical Criticism in Early Modern Europe, I summarised comments made by Thomas Smith (1690) about previous scholarship on the Johannine comma:

“Smith also made the startling claim that the evidence for the comma in both Latin and Greek manuscripts was so compelling that neither ‘Erasmus, Sozzini, Sand nor Simon have called it into doubt’”
https://books.google.com/books?id=Q6BODAAAQBAJ&pg=PA158

Steven Avery Spencer, questioning the accuracy of my summary of Smith’s argument, wrote:
“No reference is given, so I will conjecture Grantley may have misread the Latin.”
https://purebibleforum.com/index.php?threads/new-questions-that-arise-after-march-2021.1772

So just for the record, here is what Smith says, in the pages following those which I indicated clearly in my footnote:

I don’t believe that I have misunderstood or misrepresented Smith’s position. However, Smith was patently wrong in this claim, as I show in my book
Click to expand...

We know from his English work that he was well aware of the opposition of Socinus and others.

(from the 2021 page)
As representative of this position Smith cites Fausto Sozzini, who wrote:
“It is clear that these words are forged, and were stuffed into
this passage by people who desired to defend their dogma of the Trinity by whatever means possible.”110
Last edited: Apr 17, 2021

While this could use a good Latin translator, at least the whole sentence should be translated. Grantley has a period, there is a colon leading to more explication. 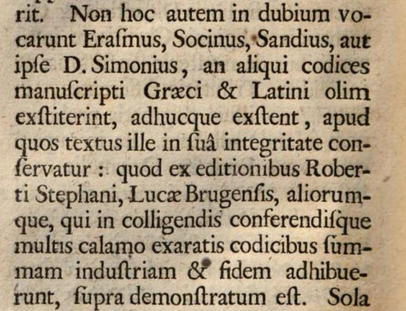 Grantley, who NEVER gave a translation of the Latin, not even the half-sentence he brought to the Facebook TRA forum, now insists that I should give a Latin translation.

a) give us his English translation of the full sentence (he changed a colon to a period in his book .. oops.)
b) take the ambiguity out of his English interpretation
c) then relate that interpretation to the Thomas Smith knowledge, highlighting exactly what is the "startling claim"

that neither ‘Erasmus, Sozzini, Sand nor Simon have called it into doubt’”
Click to expand...

What is his "it"?
Grantley does not have the integrity to answer that question on the forum.

At the moment, Grantley is simply confirming that he is floundering. He can sense he blew it again on Thomas Smith, so he switches to posture mode.

He is morphing a modest error, trying to attack Thomas Smith by a misquote, into a total lack of scholarly credibility.