witness of God in v. 9 points directly to heavenly witnesses in v. 7

An Introduction to the Critical Study and Knowledge of the Holy Scriptures, Volume 4 (1825)
Thomas Hartwell Horne
https://books.google.com/books?id=_iSt5LY1FXsC&pg=RA1-PA456

The preceding view of the internal evidence for the disputed clause of 1 John v. 7. has been given at length, on account of its alleged importance for completing the sense of the apostle’s argument (which would otherwise he imperfect), and also because it is a proof of the force and propriety of which every sincere and impartial reader ofthe word of God is fully competent to decide.2

2 The following observations of the celebrated critic, Professor John Augustus Ernesti. materially confirm the argument above stated. Speaking of the evidence deduced by Gricsbach from manuscripts against this clause, he says: —

“If the genuineness of the seventh verse depended on Greek MSS. alone, and wns to be estimated by them solely, Griesbach would have gained his cause. But although the Greek MSS. take a lead in this inquiry, yet learned and skilful critics require other helps also. In my opinion, its connection with the antecedent and subsequent verses prevents me from subscribing to their decisions, who think this verse ought to be expunged: for in the ninth verse, a comparison is introduced between the testimony of men, and the testimony of God himself; in which the apostle undoubtedly refers to these heavenly witnesses, of whom he had made mention a little before.”

Amicable correspondence relative to some popular tenets as held by the united Church of England and Ireland; between A. B. and C. D., beneficed clergymen, and E. F., a clergyman without cure of souls (1862)
https://books.google.com/books?id=_PVhAAAAcAAJ&pg=PA62
... and in accordance with this, Valpy, the learned editor of a new edition of the Greek Testament, etc., observes, “Istis verbis e textu sublatis, nescio quid curti et inexpleti semper mihi apparuit.”—

“If these words be expunged from the text, there has always appeared to me something unaccountably defective and incomplete in the passage.”

A New Literal Translation, from the Original Greek of All the Apostolical Epistles: With a Commentary, and Notes, Philological, Critical, Explanatory, and Practical. To which is Added, A History of the Life of the Apostle Paul, Volume 6 (1806)
James Macknight
https://books.google.com/books?id=_sMUAAAAYAAJ&pg=PA99
p. 109-113
https://books.google.com/books?id=_sMUAAAAYAAJ&pg=PA109 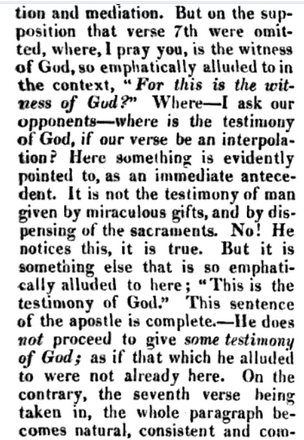 also have sermons on "The witness of God".

Chr. And their witness, ver. 9, is called the witness of God. 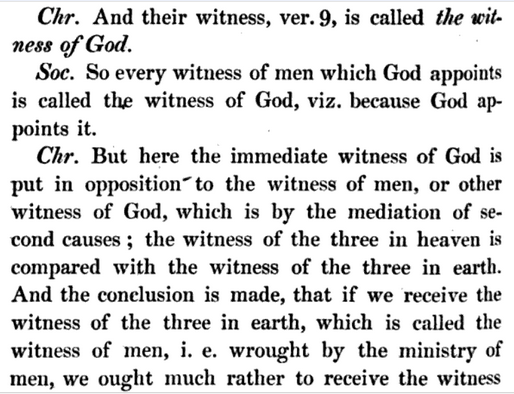 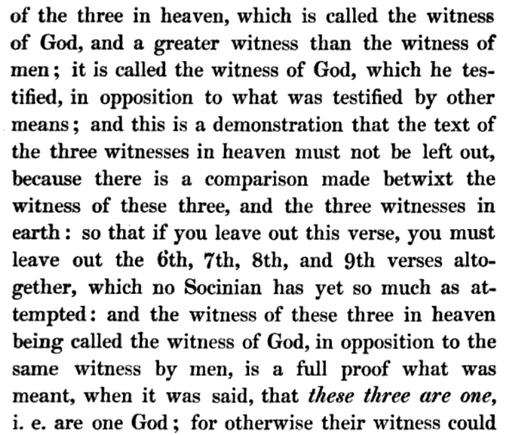 A Defense of the Johannine Comma
Selling the Record Straight on I John 5:7-8
Timothy W. Dunkin
Revised, July 2010
With the gratefully accepted assistance of Steven Avery
https://web.archive.org/web/2014112...dytoanswer.net/bibleversions/commadefense.pdf
https://www.yumpu.com/en/document/view/11724872/a-defense-of-the-johannine-comma-study-to-answernet

In addition to the grammatical problem, we should note that the deletion of the Comma also introduces a consistency problem with the interpretation of the contextual passage. The full passage, w. 6-9, read as follows,

“This is he that came by water and blood, even Jesus Christ; not by water only,
but by water and blood. And it is the Spirit that beareth witness, because the Spirit
is truth. For there are three that bear record in heaven, the Father, the Word, and
the Holy Ghost: and these three are one. And there are three that bear witness in
earth, the spirit, and the water, and the blood: and these three agree in one. If we
receive the witness of men, the witness of God is greater: for this is the witness of
God which he hath testified of his Son."

"And John bare record, saying, I saw the Spirit descending from heaven like a dove, and it abode upon him." (John 1:32)

Likewise, at the end of John's epistle, we see John's own testimony about the water and the blood,

"But one of the soldiers with a spear pierced his side, and forthwith came there
out blood and water. And he that saw it bare record, and his record is true: and he
knoweth that he saith true, that ye might believe." (John 19:34-35)

In these cases, we see these things - the Spirit, the water, and the blood - being the
object of man’s (in this case, John’s) testimony, as both passages specifically record. This
seems especially cogent if, as some scholars have suggested, the epistle of I John was
originally coupled with the Gospel of John, serving as a sort of "introduction" to the
Gospel for John's readers. It would naturally follow that as they read the Gospel, his
readers would see and understand the witness of man to the things concerning Christ and
His ministry as John relates them.

The Gospel of John contains similar references to the "witness of God" as we saw
for the "witness of men." In John 8:18, Jesus (whom John calls "the Word," if we will
remember) says, "I am one that bear witness of myself, and the Father that sent me
beareth witness of me." In John 15:26, it says, "But when the Comforter is come, whom I
will send unto you from the Father, even the Spirit of truth, which proceedeth from the
Father, he shall testify of me..." Hence, in John's Gospel, we see the three Persons of the
Trinity each bearing witness to Jesus. If the Comma is removed, then where is the
witness of God spoken of in the verse, a witness that most naturally refers to the "Father,
Word, and Holy Ghost" who bear record in heaven in the parallel formation? It is not
there, and verse 9 refers to....nothing. The parallelism between the Gospel and the Epistle
is broken, and the local referent in v. 9 is muddled.
You must log in or register to reply here.
Share:
Facebook Twitter Reddit Pinterest Tumblr WhatsApp Email Share Link
Top